Two scary signs that a site is unsafe 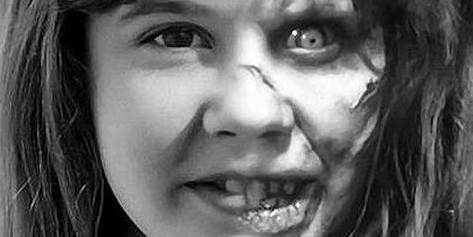 I generate random passwords of 24 characters chosen from a wide variety when registering to sites. I then use a password manager to remember the password, because of course it would be impossible to remember these.

This allows me to browse with a little more security, and it also has the intended side effect of discovering insecure sites. The passwords I choose are by design relatively hard to guess, hence relatively secure. A site that won't allow my relatively secure passwords, but only weaker ones is, by definition, insecure.

Jump to the bottom for the two scary signs I promised, or read along for an easy to follow explanation on how passwords should be stored, why, and why those signs are absolutely horrific in terms of security.

How do passwords work?

The first two ways are similar to hacking a safe, and have the same countermeasures. You should never use an easy to guess number as your safe combination, similarly using a random password makes it hard to guess intuitively. Safes with longer combinations are safer, and equally using a long password, with a wide variety of possible characters are safer.

Sites will therefore try to protect the passwords. There's no doubt that some form of password needs to be stored, otherwise how could they check if your log in is correct? On the other hand, not all strategies to secure these secrets are equally safe, but fortunately there are some standard, safe, ways.

Let's see how a system can store a password. They will need to have a list of user names, and for each they need to store the corresponding password. 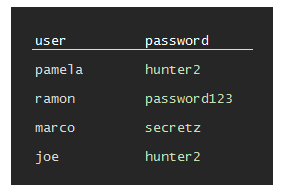 Plain text: a system could store passwords in plain text and this would basically give all the user names and passwords to a hacker that stole this list. This is bad.

What we can do is use encryption. Encryption is a technique that makes it hard to read a "secret" without knowing a "key". There are many ways to encrypt a secret, and here is an example. Feel free to skip if it's too technical (but maybe instead try to do it, it's fun!)

We can create the "encrypted" version of the password by following the instructions.

so we start with h, go forwards 7 letters and find o.

then u, go forwards one and get v, n plus 12 is z, t plus 9 is 2 and so on. This way we can write an encrypted word, letter by letter, in the table we prepared

Finally we have a result!

This operation of "sum and wrap" is generally called a "modular sum" or a "sum modulo 36" and I'll use the circled plus "⊕" symbol for it, because it's like a sum, but different.

To decrypt we can do the same operation, but follow the instructions in reverse.

This is just an example of bad encryption, but it is just a toy: there are much safer ways to encrypt data. 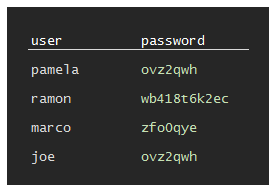 Single password encryption: A system could store the passwords safely encrypted with a master password, and this would make it hard for the attacker... unless they also steal the master password to read them!

A way around this attack is to store each password encrypted with "itself". Here's how it could be done with out toy encryption scheme.

Firstly, an instruction to move forwards by 36 leaves us where we started, a move by 37 has the same result as a move by one, etc. This is because we "wrap around" and basically limit the possible "moves" to 36 different displacements.

Secondly, since there are obviously 36 letters in our extended alphabet, each type of "move" can be mapped to a letter!

Therefore by looking up our "key" in the extended alphabet we can express it differently: 7 forwards corresponds to a "g", 1 to a "a", etc.

Our key in the example above can be represented as the word galileo.

Of course, that's because I chose the instructions in a special way! But this shows that any word can be "mapped" to a key by looking up each letter's position in the alphabet.

Finally, we can encrypt "hunter2" with a key derived from itself: 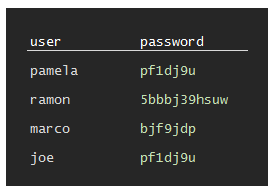 This is interesting because you can recover a password only if you know it already. This is enough to test whether the password a user enters is correct, but it makes it hard to steal! However, there are some issues with this approach: firstly it's possible to guess the password length from the encrypted version and secondly two users with the same password would still have the same encrypted password.

There is one important thing that we learnt so far: there is no need to store any password, there are ways of verifying a password without storing it in a recoverable way.

There are many ways of doing this, but this is particularly simple and easy to explain.

We take the password "hunter2" and encrypt it with itself as above. We get "pf1dj9u", which by construction has the same length as hunter2 and thus "leaks" that information to an attacker.

We want to get a fixed length "signature" or hash of, say, 4 letters. In order to do so, we split pf1dj9u in groups of four letters. In the last group, we might have less than four letters, in which case we repeat pf1d... until the group is composed of four letters as well.

If we have 1 group, we're done. In this case there are 2 groups and we'll write the second below the first

using the rules we discovered in encryption we can transform the second block in a key: j corresponds to a 10, 9 to a 36, etc. And we can encrypt the first block with this key 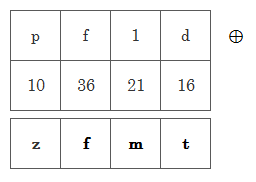 zfmt is the signature of hunter2. To verify a user entered password we hash it and compare it to zfmt. Cool, uh? 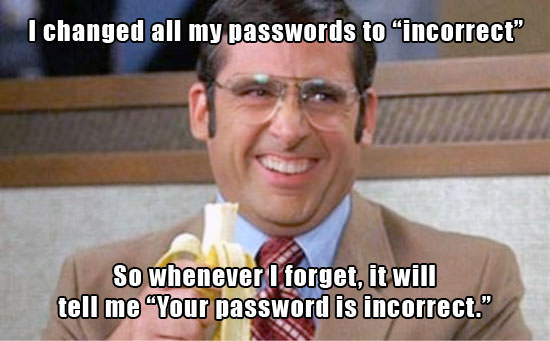 Then proceed to hash. Let's split it into three 4 letter blocks (the third needs to be padded 3 times)

These are the first 2 blocks: 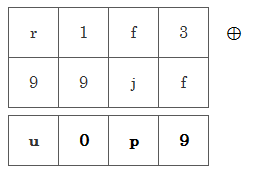 And this is the third, padded with 3 letters from the first: 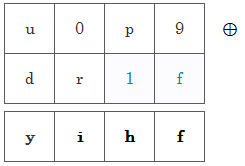 So the hash is yihf, which is not the same as zfmt and the user is not verified. However, repeating the process with the correct hunter2 will verify the user. 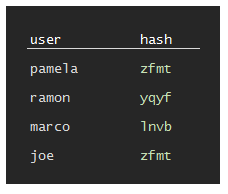 Hashed passwords: These do not leak password length, but equal passwords have equal hashes

Now, this solves the problem of "leaking" the password length, but not the problem that two equal passwords will get the same hash. Evidently if someone knows that the password "hunter2" is stored as "zfmt", then they can log in as any user who uses the same password. This may sound unlikely but it's actually a common scenario, unfortunately.

More subtly, we can take the first few million common passwords, hash them and create a "decoding table" which assigns a working password to a few different million hashes! This is not a theoretical threat: they are called rainbow tables and can be downloaded from security oriented sites or generated.

How can we make each password unique, and harder to crack? This mechanism is called "salting" the hash and it is quite simple.

Suppose that we generate a random number each time a user sets her password. If the number is random enough, and big enough, we can append it to the password and make it much stronger!

This of course leaves us with a problem: how do we verify a user giving a password of "hunter2" if the hash is different? The simple answer is that we store the salt along with the hash.

The user data now looks much more random, and no obvious facts about the passwords are leaked if someone steals the data. 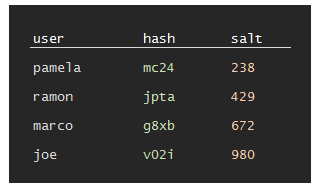 which is, with few modifications like using proper hashing algorithms and many many passes of hashing instead of a single pass as I've shown, is the current state of the art in password storage.

The two things that should always make you scared

The more variety of characters we can choose from, the harder the password is to guess. Since modern, valid hashing algorithms always return a number what possible reasons could there be to stop people from using strange characters?

Normally the reason is that the software or site you are dealing with is not hashing your password! If all the software has to do is hash the password, there is absolutely no difference in the output if you use strange, accented characters or punctuation in your password.

Passwords which are too long

Besides the obvious idiocy of limiting password length, this is a clear indication that the site is not hashing your password. If they did, then password length would be irrelevant as hashes have, by construction, a fixed size.